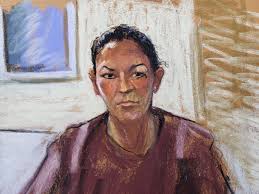 As the criminal investigation of Jeffrey Epstein continues, so does the list of his accomplices. The latest individual to be charged with assisting Epstein in his alleged sex-trafficking ring is British socialite Ghislaine Maxwell. According to the federal indictment, Maxwell has been charged with helping Epstein “recruit, groom and ultimately abuse” young girls, some who were no more than 14 years old. In addition, Maxwell is being charged with lying under oath in an ongoing effort to conceal her past crimes and wrongdoings.

Born with a silver spoon, Maxwell comes from a very wealthy British family. That is, she is the daughter of renowned billionaire publisher and business man Robert Maxwell.  Ghislaine’s life was extravagant from its inception.  She is Oxford educated and maintains a $5 million upper-east side townhouse, a history of luxurious Caribbean vacations and private jets. However, it seems as though shady, strange and illegal practices run in the family – Robert Maxwell was the subject of a mysterious death, where he fell off his personal yacht in the Canary Islands. Some believe it to have been a suicide, but others believe it have been a covert hit, planned by the Israel Intelligence Service. Whichever it may be, the Maxwell’s are clearly no stranger to negative front-page headlines.

Ghislaine Maxwell apparently dated Epstein in or around 1992. After their romantic relationship came to an end, they remained close friends. The unsealed indictment, filed on July 2nd in federal court, outlined their relationship and described how Maxwell groomed young girls to travel to Epstein’s various properties for sexual intercourse. Federal prosecutors claim they have flight logs, business records and money trails that show Maxwell’s involvement in Epstein’s grotesque sex trafficking ring. Prosecutors also have hours of deposition tape from an earlier defamation lawsuit, where Maxwell vehemently denied any involvement in Epstein’s sexual escapades and claimed that she never oversaw the arrival of any underage “masseuses” to Epstein’s properties. Prosecutors claim Maxwell perjured herself during that deposition and lied about her involvement in Epstein’s sexual affairs.

The big issue is whether she will cooperate and assist the prosecutors in indicting Epstein’s high-profile co-conspirators, which include Prince Andrew, Bill Clinton and Donald Trump.  Apparently, each of them were good friends with Epstein and either traveled with him on his elaborate trips or went out with him with young women.  What we do know is, first, that women have come out to assist the prosecutors in their efforts to indict others.  Second, it is clear that Maxwell will face significant jail time.