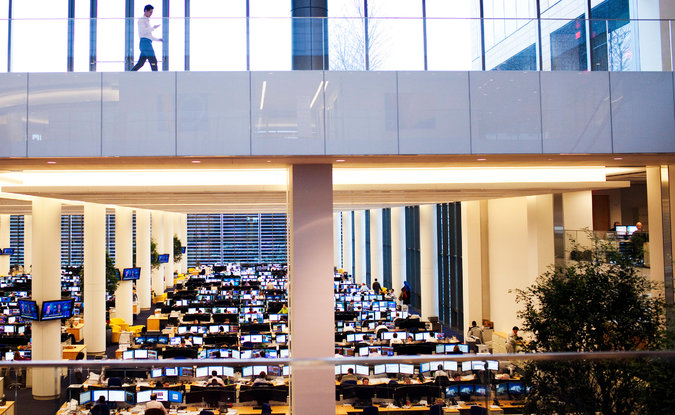 Offices of the Royal Bank of Scotland in Stamford, Conn., in 2010. Credit Christopher Capozziello for The New York Times

When a Wall Street executive is fired, it is usually done quietly.

But a recent arbitration award has now shed a light on a termination that has caused an embarrassment for the bank.

The Royal Bank of Scotland’s United States securities division botched the firing of a former executive so badly that a Financial Industry Regulatory Authority arbitration panel ordered the bank to pay him $2.05 million in compensatory damages. The panel, in the decision last month, also ordered the bank to retract his termination and expunge his regulatory record of defamatory comments.

Lawyers who follow securities industry arbitrations say they were surprised by how severely critical the decision was of the bank.

According to the arbitration panel’s case summary, the reason for the Royal Bank of Scotland to fire the executive, he claimed, was to distract people from finding out about “significant internal turmoil” within the bank.

The findings “are almost a mirror into the darkened soul of Wall Street,” said Bill Singer, a securities regulatory lawyer and former staff lawyer at Finra’s predecessor agency.

The executive, Jeffrey Howard, said his career was on the rise when he joined Royal Bank of Scotland’s R.B.S. Securities in November 2012 as the head of prime services for the Americas, a role that put him into contact with the firm’s important trading clients.

In May 2013, he was promoted to global co-head of prime services, and a year after that, he took on the group as sole head. He was a board member of the Futures Industry Association. In August 2014, it all came crashing down.

Mr. Howard, 45, was dismissed from the Royal Bank of Scotland for cause in August 2014, something that he says blindsided him.

“It was a surprise and a shock and certainly very sobering,” he said in an interview, while refusing to discuss the specific claims of his firing.

He filed a breach of contract and defamation claim with Finra almost immediately, saying R.B.S.’s disclosure about his termination was false.

An R.B.S. spokeswoman did not immediately respond to a request for comment.

The arbitration decision comes as Finra begins a yearlong review of company culture and how policies, training and leadership shape the tone of the workplace.

Regulators are broadening their scrutiny beyond aggressive sales tactics to the training and supervision of employees and managers and how firms find and monitor employee subcultures that act in contradictory ways to firm policies.

And Wall Street workers appear to be more willing to go after former employers, especially in situations that concern disclosures that firms make about departing workers on a regulatory record called a U5.

Richard Roth, a New York lawyer, said there was almost two times the number of claims filed so far this year as last year.

For the month of January, there have been 35 claims of breach of contract, compared with 24 in the month last year, according to Finra data. There have been 32 claims of libel, slander, defamation, wrongful termination and libel or slander on a U5, up from 17 last year. Cases can have more than one claim.

Prime services is a highly specialized corner of the securities business, where banks provide a package of trading, settlement and cash management products to hedge funds and other big trading firms. Mr. Howard joined the Royal Bank of Scotland after several years at Bank of America Merrill Lynch.

The Finra panel found after six days of witness statements and examining exhibits that Mr. Howard should not have been terminated for cause and that the Royal Bank of Scotland made fundamental errors and inconsistencies in how it interpreted and applied its internal policies, the facts it used to make the decision to fire him, and the rationale underpinning it.

The Finra panel concluded that he did not violate any specific or significant company human resource or other internal policy.

Mr. Howard said he hoped to return to Wall Street now that his record was cleared.

“I’m certainly ready to move on from this,” he said.